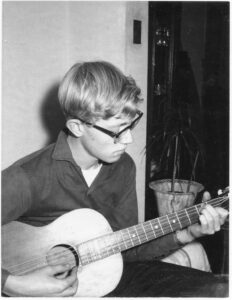 This is, I think, the first “song” I ever wrote. I must have been 14 years old, it was a jingle I wrote for the insecticide “Raid.” Amazingly, they did not adopt it.

About this recording:  My parents liked musical instruments. They bought a guitar but never got around to learning it, so when I found it gathering dust there was no competition for practice time. My mother played piano, my father played french horn in high school. They bought a cello, thinking they would learn it, but did not. My mother bought a harmonica and started to learn it; later I learned to play it well enough to be the primary harpist in a very casual jug band. My sister Ruth had bongos, which she loved to hit. My father wanted to learn to play drums, so he bought a set and installed them in our living room, where they remained until I went off to college. He never really practiced, but he could play simple things like marches just fine. Later, when I was in high school and tried to put together rock groups, we met at my house because our prospective drummers didn’t own any actual drums.

As I was beginning to learn to play guitar, sometimes my family would assemble in the living room and commit acts of attempted music. This recording is an example of one of those. My father is on drums, my sister and I sing the song, along with my mother from time to time.